*ALL AMATEUR UNDER CARD

*ALL AMATEUR UNDER CARD

On January 24, 2020 Ceremonial Weigh-in will be taking place at Pinz in Kingston MA. There is  still time to get your tickets from your fighters so you do not miss any of these amazing fights lined up for January 25, 2020 Fight Night as Cage Titans returns to Plymouth Memorial Hall. To get your tickets, visit www.cagetitansfc.com or get them at the door on Fight Night.

As always there will be great media coverage of both weigh in and fight night. You don’t want to miss it.

One thing I will never understand is MMA retirement. I have seen so many MMA retirement announcements and then they are fighting again. At this point I don’t believe when anyone retires. Conor McGregor retired and that lasted how long?

I really don’t get it. A fighter can lose consecutively four, five fights and doesn’t retire. Holly Homes loses to Amanda Nunes and is asked to retire? Why is that?

Sponsorship is very important for fighters. It’s not just for the professionals. it’s also important for the amatures. When I sponsor someone, I am helping them achieve their goal. Just like I support them, I also must be what they are looking for to be represented by. Even though any sponsorship would work, there is still a fine line.

Many people ask me, “why doesn’t anyone sponsor me?’  My response is usually, “Have you taken the time to look at your social media account?” Before I agree to sponsor anyone, I will first look and see who they are, through social media, through normal interactions, or in any other enviornment we may be in. Everyone is different and I don’t want to work with someone that doesn’t know how to carry themself.

If you are looking for a sponsor, try to be the person you want to represent you; be that person, be confident, be true, and it will come to you.

Now, with that being said I can usually tell who wants it and who doesn’t. Again, I am not a fighter, I will not pretend to know anything, because I don’t. From my point of view when a fighter has that burning desire to fight there is absolutely no one, or anything that can stand in his/her way. Age is not a factor, training is not a factor. They find a way to make it work. I have seen fighters find a temporary solution to get them where they need to be.

Can’t fully train? Time to go to the gym and workout. Can’t fight, due to age? Test skills with smokers and grappling matches. The word “No”, is not an option. The mission is to be a fighter no matter what.

I have watched and trained on and off and I have never really understood some of the combinations my coach would show me. He would have us do a combination of about seven strikes, going straight on like a bulldozer. I have seen fighters that use two or three strikes and then back off to see what their opponent is going to do. I feel if they kept going they could have finished the person. I know everyone has their own game plan, its just something I could never understand.

On June 15, 2019, I witnessed a fight that showed me why you have to remove any obstacle that is in the way of your goal. This fight was of DeMoura vs Hagan at Plymouth Memorial Hall by Cage Titans. The heart, the drive, the passion, of these two made everyone jump out of their seats. It was a non-stop action filled fight. I finally understood why my coach would show us so many strikes and different combinations. Talk about a debut.

Make sure that if you are fighting, you’re fighting for the right reasons. Once the cage doors closes it’s no longer a game. Ready or not there it goes…

When I was younger I used to watch a lot of martial arts movies. I always thought that kickboxing was Muay Thai. As I grew up I wanted to do kickboxing. As I would take classes I was very disappointed. It was either a cardio class or simply because the instructor was passing kickboxing off as Muay Thai. I had to ask at one point what Muay Thai was, because it felt wrong saying I was doing something I wasn’t.

As time went on I was able to attend a real Muay Thai show at Foxwoods Casino, Lion Fight hosted by President Scott Kent. Wow, was that a show. I knew right there that’s what I was looking for and needed in my life. What I was taught was not Muay Thai.

Shortly after I was able to attend a new and upcoming promotion No Boundary Fight. This would be the first promotion in Massachusetts that I attended that held Muay Thai. As time went by I met different professionals in the Muay Thai industries.

I met a gentlemen that is an MMA and Muay Thai judge since 2009 and then became Muay Thai ref since 2012 and MMA ref 2015. As well as being involved with our MA and NH state athletic commission

Not too long ago one of our local MMA and Muay Thai Judge and referee started NEYDL Muay Thai, because there is very limited representation of Youth Muay Thai in the US, especially in the New England area. He used his years of experience in Muay Thai officiating and rules and regulations, to provide an environment that is fun and safe for youth between 6 to 17 year old to compete in.

It is important to have good officials that would make the sport that much better, for fighters, coaches, and spectators. Fighters safety to prolong their careers by reduce unnecessary damage to the body

He has also been involved with Muay Thai rules and regulations. This great because now our youth will not be mislead as I was many years ago and will have a better chance in the future.

Not only does he have the experience but he also takes the time to provide the opportunity for others to become judges or referee in Muay Thai. Allow this beautiful sport to grow. For more information on becoming a judge or referee contact Alan Lau.

“Train up a child in the way he should go: and when he is old he will not depart from it.” Proverbs 22:6

In the art of Muay Thai you meet many people. People with different talents and goals. A few years ago I met a young man that was known as “The Surgeon”. At that time I heard of him, but never had the opportunity to see him fight. Then it happened. Chip Moraza-Pollard entered the ring to become the champion.

As I saw him fight for Lion Fight I started to notice his technique. It was not quite like the rest of the fighters. Everyone has their own style but his is one you need to see. He has no fear in his eyes, he is ready for surgery, ready to remove anyone or anything that will get in the way of his belt.

In order to be a surgeon you need to have a clean, precise, meticulus precision. If you see Chip “The Surgeon” Moraza-Pollard walk into the ring to operate you will see his technique. He is the Muay Thai Surgeon without a license. With 11-0, 7x world champ.

Many people look at fighting as if anyone can do it. People don’t realize that it is more than that. When a person chooses to fight they have many factors that help them decide. Some fight in honor or memory of a lost friend or family. Some fight to prove to themselves what they are capable of, and some do it for the passion of the sport.

What people don’t understand is that the fighters sacrifice so much before they are set to fight. That alone is stressful and dealing with the loss of a loved one is even more difficult. Staying focused and composed is very import and it is not easy.

Some people usually joke around and say, “if they die, they die”. Do you understand there have been many that have lost their lives? That really bothers me, because I know some that have died. That is why it’s important to have the right officials there. Ones that are properly trained to handle any and all situations presented.

I remember being at a show where the fighter got KO by a kick to the face. I was on the edge of my seat because there was so much blood everywhere and he wasn’t moving. I stopped shooting because I wanted to make sure the fighter was ok. After a few minutes the fighter got up and thankfully was good. He was checked by the doctor and everything was good. Now, I know many feel that I should have taken pictures of him laying there. However, my main concern was his well-being.

The fight scene isn’t for everyone and it is much more than entertainment.

We live in a time that everything is a national holiday or it’s an awareness for something. April is known as Sexual Assault Awareness month. As you also know Sexual Assault does not discriminate on gender, race, or religion.

I always thought that learning a martial art would make me violent or aggressive. I also thought that if I knew some sort of self-defense I would be untouchable. Unfortunately, that isn’t the case. Knowing a self defense will not keep me from being victimized. It’s important to understand that self-defense is a tool to get out of a certain situation. It’s not going to save you from being a victim, it will make you a survivor.

My advice to everyone is this. Learn stand up and know some ground defense. This will allow you to control the situation. Keep the assailant at a distance or a way to allow you to get away. Safety first!! The two self-defense I use are Muay Thai and Jiu-Jitsu.

I suggest that you look in your local community and find a place that will teach you. You don’t need to have a black belt in Jiu-Jitsu or a high level Muay Thai fighter. Your goal is to learn one or two moves that will keep you save and survive the situation. It’s better to know how to defend yourself, than to be in a situation that will show you why you have have learned something. 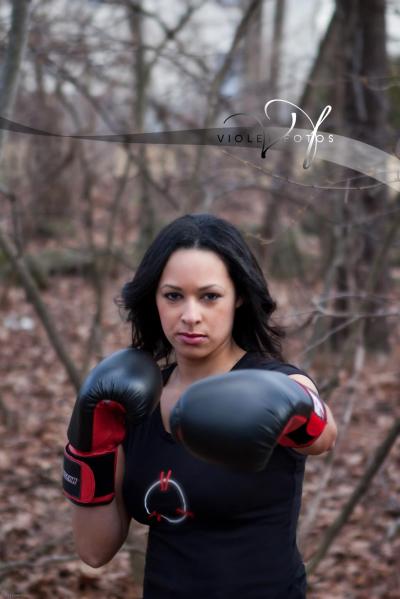 Like I have stated before, I am not a fighter and I have no medical background. With that being said, one of my biggest concerns and fears has always been weight cut. It’s important to know your body before deciding to put your body through so much stress. I don’t know what is a healthy weight cut but I do know that putting your body through so much is not good, especially during a short amount of time. This can cause your body more harm than good.

Weight class is a key component of fighting. It is important to know that without properly considering certain aspects can lead to major health issues, including death.